Tonight I set out to make spaghetti for my little brood while waiting for Ryan to get home from work. I chopped the onions and peppers, opened the can of mushrooms, and defrosted the beef, only to find out that we're out of crushed tomatos for the sauce. Sooooo, I got out the kidney beans and stewed tomatos and cheese to add to the mix instead to make a concoction we've put together before which is served over macaroni noodles or penne... then I found out we were out of both noodle staples. Sooooo, out came the rice. Ryan phoned a moment later to say he was just getting out of work and going to be late. I told him what I was putting together and warned him not to get his hopes up about dinner because I was inventing a new dish. I described it and said I thought it was going to probably be nasty, but it was a hodgepodge of all the ingredients we had left in the cupboard until he can get to the store. He then replied, "Oh, I know what that dish is called!"
"You do?"
He said "Yes, it's an old recipe that has been made by mothers for children all over the world... it's called, 'shut up and eat it and pretend you like it'."
When the dish was served, the kids asked what it was called, and rather than tell them what Ryan suggested, I told them the dish has no name, and offered to let them name it. Hannah brightened, "Let's call it 'Frank'!"
And so, Frank it is.
Posted by Mommymel at 7:57 PM 1 comment: 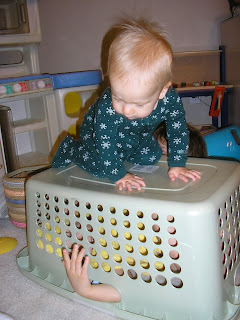 Caleb has finally learned how to get the upper hand on his sisters... yesterday Sarah decided to play in the laundry basket, and before you know it he had crawled up on top, and perched himself proudly. He was tickled to death at trapping big sis beneath him. Did Mom swoop in to save her little darling girl? Nope, I grabbed the camera :)
Posted by Mommymel at 2:12 PM 1 comment: