All Sugar and Spice and... Dynamite?

I fear that I may have misrepresented my girls' innocence in the little war we have daily in my house when I wrote this post (click for link). So I felt I should set the record straight, lest someone think that Caleb is the only troublemaker in our home. In truth, all three of them are prone to behaving like small arab terrorists on a jihad-like quest to make their enemy bleed or make Mommy's head explode as a random side-effect of their *terrorism.
So I've compiled a list of the girls' tricks and trouble-making for your further enjoyment. They usually work as a team at most of this, with Caleb as their target. In my little Buddy's defense, I figured I should even out the scale a bit by recording a little sampling of his sisters' favorite torture-tactics:

1. Sister-Gate:
Like an amped up, meaner version of "red-rover," the girls will band together as a team to play keep away with Caleb's most favored toys. Poor kid doesn't stand a chance... like the kid from The Shining gazing down the hall at the creepy ghost twins (wanted to post a picture but it scared me too much, so I'll just leave you with your own mental image ;)) In the end, he usually just squeals and runs off, but he has been known to hurl heavy objects at their twin Berlin Wall, which just makes me feel bad when I have to punish both the girls AND Caleb.

2. Bunkbed Shut-Out:
Caleb is not allowed on the top bunk of the bunk beds in either his or his sisters' room, and the girls know it and take full advantage. So on those occasions where Mommy makes the girls allow their little brother in on the action in their rooms, they will just flee to a higher altitude for their play, making it impossible for him to join in the fun. For extra brother-torturing fun, they will hurl stuffed animals and pillows at him, which at first is kinda fun to the little guy, until he realizes he can't hurl them back. He has the perfect revenge, though, because while the Rapunzel twins are up in their tower, he can ravage the lower parts of their room and wreak havoc upon their toys ;)

3. Death by Volume:
It's a well-known fact that a five year old girl can achieve heights of vocal volume and pitch that would shock even the most-skilled opera go-er. So when Caleb invades one of the diva's space, the offended girl will usually use her sound forcefield as a weapon, deploying a bone-shattering, angry rant that makes curse words unnecessary. When needed, this weapon can be deployed from the time-out spot across whole clusters of rooms, and does not diminish during a spanking, making it one of the girls' most trusted and oft-used strategies of brother-torture. 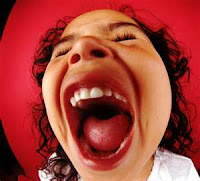 It's kinda not fair that Caleb has to live his life like a parolee with his parole officer breathing down his neck. The sisters feel that it is their job in life to report him for every offense, no matter how trivial, so that Mommy can be the one to inflict pain and punishment. It's their way of making the job of driving Caleb crazy simpler without actually having to lift a finger.

They look sweet and innocent, I know, and usually they're just cute little chuckleheads who sing loud hymns out of tune and dress themselves and their dolls in outlandishly mismatched outfits, but occasionally a dark side appears. I'll never pretend to understand sibling rivalry, having been an only child, but I know God has a sense of humor giving me three kids after spending my childhood up my Mom's rear-end driving her crazy all the time begging for siblings. I think even if Jesus himself were standing right in front of them, one of them would be trying to elbow out the other two to be first in line to meet him. It's just a sibling thing, I guess ;)

*Ok, now I guess I have homeland security flagging me and reading this because of my wording... hi there big tough guys, it's just lil' ole' me spouting my usual snarky mommy-nonsense. No real bad stuff here, I pinky swear!

Posted by Mommymel at 7:21 PM No comments:

Overheard in my kids room this morning...

If you are a mom or dad, don't you just love listening to your little ones over the baby monitor sometimes? It's sanctioned eavesdropping, and the stuff that your kids say when they don't think you're listening is often hilarious. This morning I overheard this conversation between Hannah and Sarah as they were "Teaching" their twin baby dolls:

Sarah, singing to the tune of B-I-N-G-O: There are 7 Continents, Antarctica's the cold one. North America, South America, Australia, Europe, Asia, Africa.

Sarah: I'm not gonna talk to you or play with you ever again!
(5 second pause)

In unison: Ok, now listen kids, "[both kids break into a song rendition of the Lord's Prayer]"

Sarah: Ok, now this time, we're gonna learn another song about God so you can know about God, and Hannah, if they don't sing, you smash their heads together.
Hannah: Oooh, I'll smash em and send em to jail.

I had to stop listening at this point from giggling so hard in the hall outside their door (I moved from my spot at the monitor so I could hear better). I swear I've never smashed a head or even threatened them mildly for not participating in lessons, so where do they come up with this stuff? My kids are nuts!
Posted by Mommymel at 7:13 AM 1 comment:

Communicating with a 2 year old boy is an experience akin to speaking English to someone who speaks Swahili. Not to brag, but my little guy has better than average communication skills for his age, not by any wonderful-speech-therapy-mommy methods of my own, but rather out of his own cleverness and need to make himself heard. Nevertheless, he still has his moments. Today, while trying to usher the littles outside for playtime, Caleb just insisted that he needed to bring his ball outside. "No problem Buddy," I replied, "which one?"
"My ball"
"Ok, which one Caleb?"
"The bally-ball!"
"What bally ball?!"
"The round one."
"...(Stunned, stifled-laugh silence)...Can you be more specific?"
"The one that bounces!"
"Ohhhkayyy, that's closer to helpful, but they all bounce... just tell me which ball you want... do you want the tennis ball?"
"NO!"
"The Basketball?"
"NO!"
"What color ball was it? Wait a minute... you call everything purple... let's see... was it the one with Buzz Lightyear?"
"No! The one that goes in the street!"
"THEY. ALL. DO. THAT!"
(four minutes of frustrated guesses later...)
"Let's just look in the toybox for it" We shuffled thru the toybox for about 5 seconds before he noticed the same foam basketball that he was looking at 5 seconds before this all started...
"Der it Is! I got it Mommy!" and off he trotted happily outdoors.
As I shuffled outdoors, bitterly I thought of all the wonderful things I could have done with those 5 minutes of my life while trying to sort out what my adorable little imp was wishing for ;) Reminds me of an old skit I loved of Abbot and Costello...


Abbot & Costello Who's on First by jwj
Posted by Mommymel at 9:03 PM No comments: 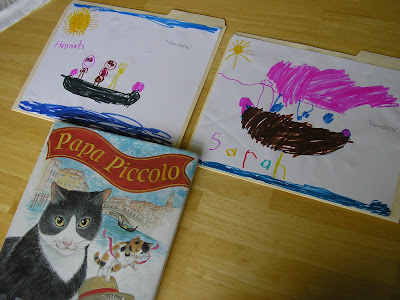 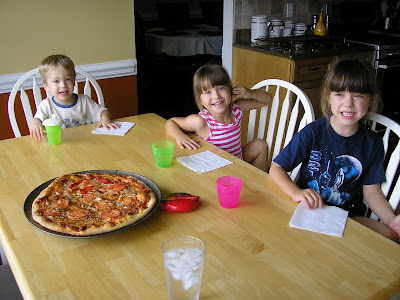 We're up and rolling for the 2011-2012 school year, and off to a good start. This week we are beginning by reading "Papa Piccolo," a story about an Italian cat in Venice who adopts 2 wayward kittens, so naturally we're starting out by learning lots of fun stuff about Italy. Meaning, ITALIAN FOOD! Today we started lapbooks for our book-of-the-week, then created a map of Italy and the girls drew pictures of themselves in a gondola. Then we made Pizza, which included great lessons related to the science of making dough and identification and use of simple common fractions (1/2, 1/4, 1/8), as well as learning the difference between "teaspoon", "tablespoon" and "cup". For the remainder of the week we'll be learning new vocabulary (like "gondola," "canal," and "barge"), becoming familiar with a few simple italian words, making spaghetti, and learning about perserverance (a trait highlighted in the story) with related bible verses. The kids also started their reading and mathematics lessons, and I was excited to see how much they recalled from last year.

On the down side, I've already noted a few challenges to our beginning year...

For one, I've got to figure out how to keep our school time short enough so that everyone also gets time outside to play and Caleb can have the attention he needs during and after school time.

Also, I'm noticing the kids are going to have to learn patience and waiting skills, as today was pretty much a free for all of interrupting, "mommy can you ____?" and "MY TURN!"

And lastly, to be honest, my patience level is going to need a major overhaul. I notice I get so easily overloaded when everyone is talking (loudly), calling out for me or whatever is needed, and demanding my attention. I know regular teachers deal well with up to 30 kids at a time, so I figure 3 IS do-able, but I've got to just persistantly pray for more patience and a longer fuse :)

All in all, though, it was a positive first day of kindergarten for the girls, and even Caleb had some fun times helping to make pizza, coloring with us during lapbook time, and listening (a little) to the story. I'm excited to see what the rest of the year brings!
Posted by Mommymel at 1:00 PM No comments: