Life at the Bar Scene?

Today I started to ponder my life with bigger kids now, and I began to notice some striking parallels to life in some sleazy Vegas bar.  It all started when I was listening to Hannah give Caleb a thorough reaming, shouting, "I won that FAIR AND SQUARE!" while chasing her little toad of a brother as he squealed with delight, skidding around furniture at top speed after stealing something from Hannah's toy purse. I thought to myself, "I feel more like a bouncer than a parent right now,"  as I hooked Caleb by the collar while rounding the corner nearest me and sent him off to cool his heels in 6-year-old jail.  That got me to wondering, and thus this compilation of ways our life right now resembles a rowdy, shaded pub scene...
1.    Ear-Shattering, Nonsensical Music- By far the easiest commonality our life shares with a bar scene, there is an almost constant stream of high volume musical rubbish assaulting my ears.  This has to do with a newly acquired keyboard with a programmed selection of musical cuing lights to help my children bumble through classical selections like "Fur Elise" and more contemporary offerings such as, "Can You Feel The Love Tonight" with an equally poor understanding of the underlying tune or tempo.  And for some reason, it's only good if it's LOUD.  I'm not sure if I should encourage their blooming musical interest, or nip it in the bud before they end up like this: 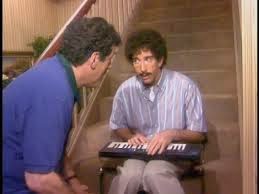 Dear Lord, Don't let this be Caleb in 15 years

2.  Spontaneous Fist Fights-  I'm an only child, so this MYSTIFIES me.  When I was a girl, I dreamed of being able to have a permanent playdate with a sibling who would, I imagined wistfully, always be there for me.  Meanwhile, my little yahoos can't spend 10 minutes together most days without getting into a brawl over something.  Then they're utterly stupified as to why I eventually lose my schmidt and throw them all into kid jail rather than carefully sorting through to the root of the problem and solving it for them.  "That's not FAIR!" they shout.  "He/She started it!" come's next.  Yep, really not that different from, "He was flirting with my girl!  He had it coming!"  Oooh, but while I'm on the subject, that brings to mind...

3.  Mobs of People with Drunken Motor & Reasoning Skills- My kids are not toddlers anymore, but when they were I would TOTALLY understand if they just fell over for no reason or thought it was a good idea to bite their friend because they were ticked off.  Now, however, it is really getting old.  One of us, let's just say her name rhymes with CLARA, is particularly bad at the whole "remaining upright" part of life. In fact, I'm pretty sure my sweet girl does not possess a center of gravity like the rest of us because the number of times she ends up wailing away on the ground is staggering! She also has a remarkable ability to fall off things, which is why that playset we bought for them terrifies me.  Hannah, much like any good wing-man, has consequently become an excellent stand-in nurse for when I'm too busy to help her, and can perform all sorts of first aid now.
As for drunken reasoning skills, the other day I managed to stop Caleb just milliseconds away from scraping the snow off our cars with a metal RAKE.  Nice effort buddy, but how bout you go build a snowman instead and Momma will clear the cars, mm-kay?  And what kind of defective brain waves made my children think it was a good idea to wrap their whole bodies in bubble wrap the other day (including their eyes and arms) and go off shuffling at high speeds into each other like bumper cars over a hard tile floor??  (Can you guess who ended up face-down, mummified nearly entirely in bubble wrap on the floor with a bloody nose on that one?  Go ahead, I'll give you a second to think...).    There's just a whole lot of decisions around here that remind me of a gaggle of frat-guys who've had one too many shots of tequila.

4.  Bar food and Naked Table Dancing-  Nevermind that I constantly need enough food to keep a casino buffet stocked- That metaphor is for another day.  Nevertheless, it seems no matter how much I try to provide healthy foods, my kids will always and forevermore demand nachos, fried foods, and things made with extra sauce and cheese.  And somehow even though we all work to sweep the floor multipillion times a day there are enough crumbs to remind me of those bars in Texas where you're welcome to pony up to the bar and shell peanuts all day and then just swipe 'em onto the floor when you're all done.  Much like the drunken Texas patrons and their peanuts, no one here much minds the odd crunching sound under their feet and the pokey debris on their socks quite enough to be willing to spontaneously sweep up without being told by management.
As for the naked table dancing, well, you can imagine it's probably not the 8 year olds, but dearest Caleb, who constantly yearns to be the center of attention more than even the most desperate college girl, and would gladly embrace any opportunity to doff his shirt and pants and dance a jig on the dinner table if he thought he had enough lead time between him and his daddy before the spankings could begin.  Here's him break-dancing on the chair one lunch time recently... you can't see the spinning, but believe me, it is there.  It's always there, sigh.  At least he was fully clothed :) 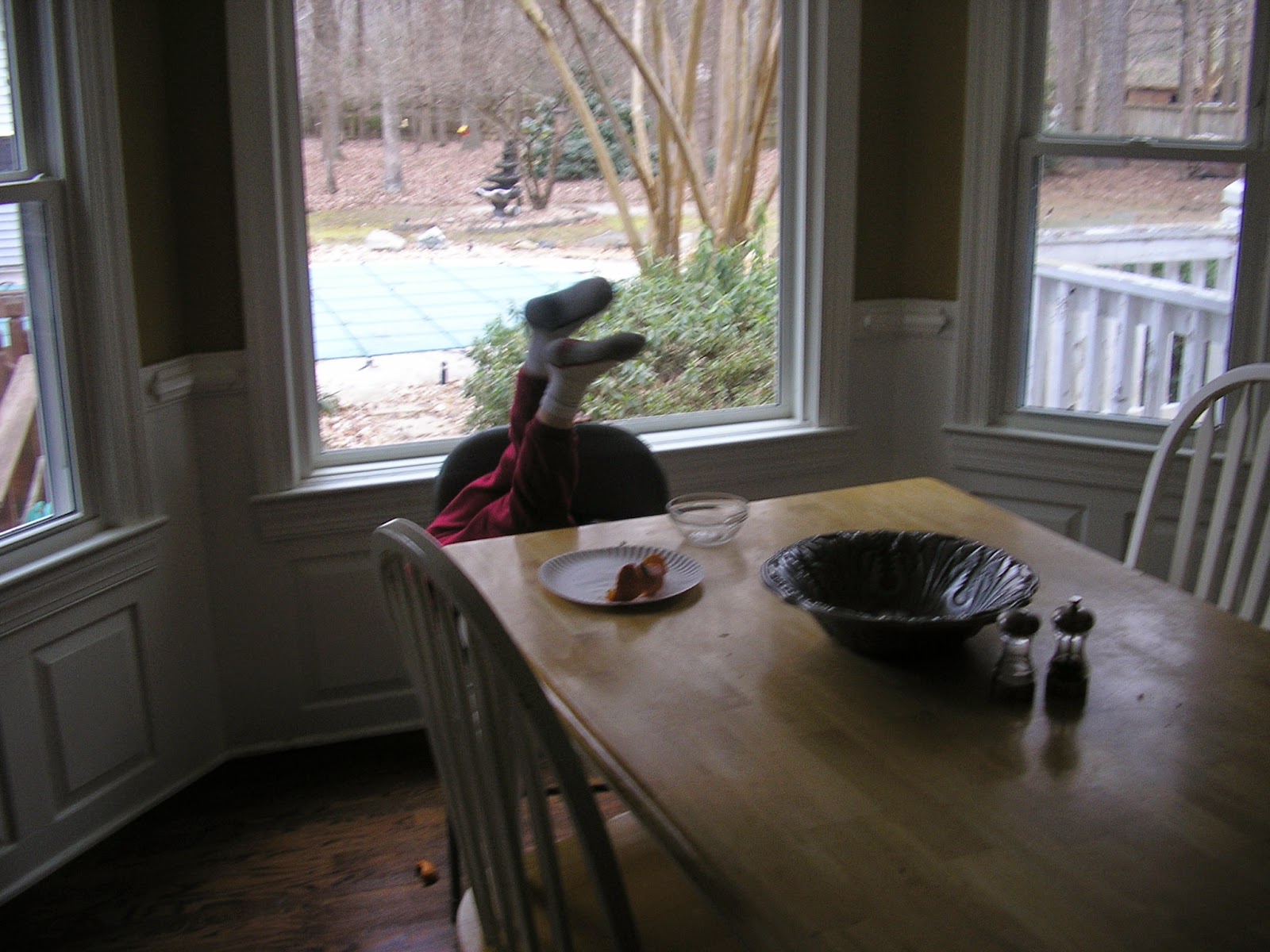 Life IS fun at my house, despite the spilled drinks, patrons who often smell like they need a bath, and the constant threat that someone will vomit all over their waitress.  They bring laughs to my life, help me to see that the crumbs AREN'T that big of a deal, occasionally talk me into dancing along to the music, and keep me on my on my toes in tip-top shape, that's for sure.  And, while I love the business, it's also nice when happy hour starts at 8 pm, as the little patrons pass out in their beds and Mom and Dad can shut the place down and sit back and relax. :)
Posted by Mommymel at 4:44 PM 2 comments: