Our family had it's first pet death yesterday.  Sarah ran up to me while I was between loads of laundry, shouting, "Mommy, I think Hermie's dead!!" Hermie, one of our three pet hermit crabs, has lived with us for a year now, and has been well liked by the children and surprisingly well cared for, given that after the first couple weeks showing them how to care for their pets I pretty much left it all up to them.  I asked Sarah, "Are you sure he's dead?"- because, well, hermit crabs, to me, are even more boring than fish.  Pretty much they stay underground below their sand 80% of the time, only surfacing to eat, drink, poop, and tip their little metal thermometer upside down to drive the kids crazy ("Ugh, they did it AGAIN Mommy!").  Really, I'm shocked these creatures are so well loved. Sarah responded, "Yeah, don't you remember I told you last week I thought he was acting funny?"  "In my defense, Sarah, you said he wasn't moving much and didn't seem interested in food... that pretty much represents his normal state of being 8 months out of the year... so how do you know he's dead?"  "He's limp when I pull on him.  Usually he pinches me when I do that," she said sadly.  "You mean, he's just flopping around?"  "Yeah, like I could just pull him right out,"... and with that, I knew poor Hermie was really well-and-good dead.  I immediately pictured this in my head, as I prepared myself for the tearful, heartfelt goodbye Sarah would want to have for her deceased shellfish: 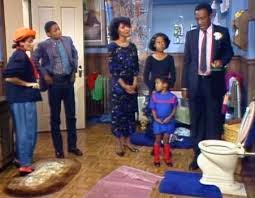 I should have known we never do anything like normal people.
"Do you want to have a funeral for Hermie?" I asked sympathetically, expecting tears.  "No, but can I get another one today at Petsmart? I think they have them there." - You may have heard me rolling my eyes at that moment, so heavily did I do so.   Sigh.
"Ok, we'll get you another hermit crab sometime soon... I know Darth Pinchy (Caleb's crab) would like a friend in there and Pinky Pie (Hannah's crab) never comes out of the sand [seriously,NEVER. I'm afraid to say she may have kicked the bucket, too, but I'm not going digging for her- corpse removal is not my job]."  So I left her with the instructions to get rid of Hermie's body.  "Should I take him out of the shell?"
"EWWW, no!  Just figure something out."
And with that, Sarah threw Hermie's poor little hermit crab body out the window.  :(  When I found out, I chided her for treating her beloved pet so callously, but she replied that she wanted him to be out where his body could feed some other animal.  Ok, well, that's not so bad, I thought.
Meanwhile, the 6 year old was out riding his big wheel in the driveway.  20 minutes after my conversation with Sarah, I hear Caleb shouting to me from the door, "Momma!  Come see!  I found Hermie out in the front yard and he's DEAD!"  Uh-oh.  I thought, finally Hermie would be remembered with tears from my sweet boy.
"Yeah, honey, Sarah found him dead in his cage and he was dead, so she threw him outside."
"Oh, ok. Well I got his shell for you."  "Say what?" I called back from the laundry room.  "I got his shell.  I took Hermie out." And with that, my son rounded the corner to where I was with poor little Hermie in one hand and the shell in the other. "EWWWWWW... GET THAT THING OUTTA HERE!" I said in my head.  In my head. It took effort not to let it out, but I just kept thinking, "must. teach. compassion!"  So instead, I replied, "Baby, that's Sarah's pet and you all loved him.  Could you please go give him a proper burial?"
"Sure!"  And with that, he hopped out of the room, gleeful to have a guy job.
20 minutes later... "Caleb, did you give Hermie a burial?"
"Oh, no.  I played with him a little bit and then threw him out for the animals to eat."
"So much for teaching compassion," I thought to myself.
... then I realized he never said "wild" animals...

Comments are AWESOME... but be nice or I might cry, kthanx!
Mel