Last week my father and I went out to clean up the back yard a bit before installing the kids' Christmas present, a playset I purchased off Craigslist.  I have to say, the playset is so super mega awesomely huge and full of fun stuff even I can't resist playing on it. 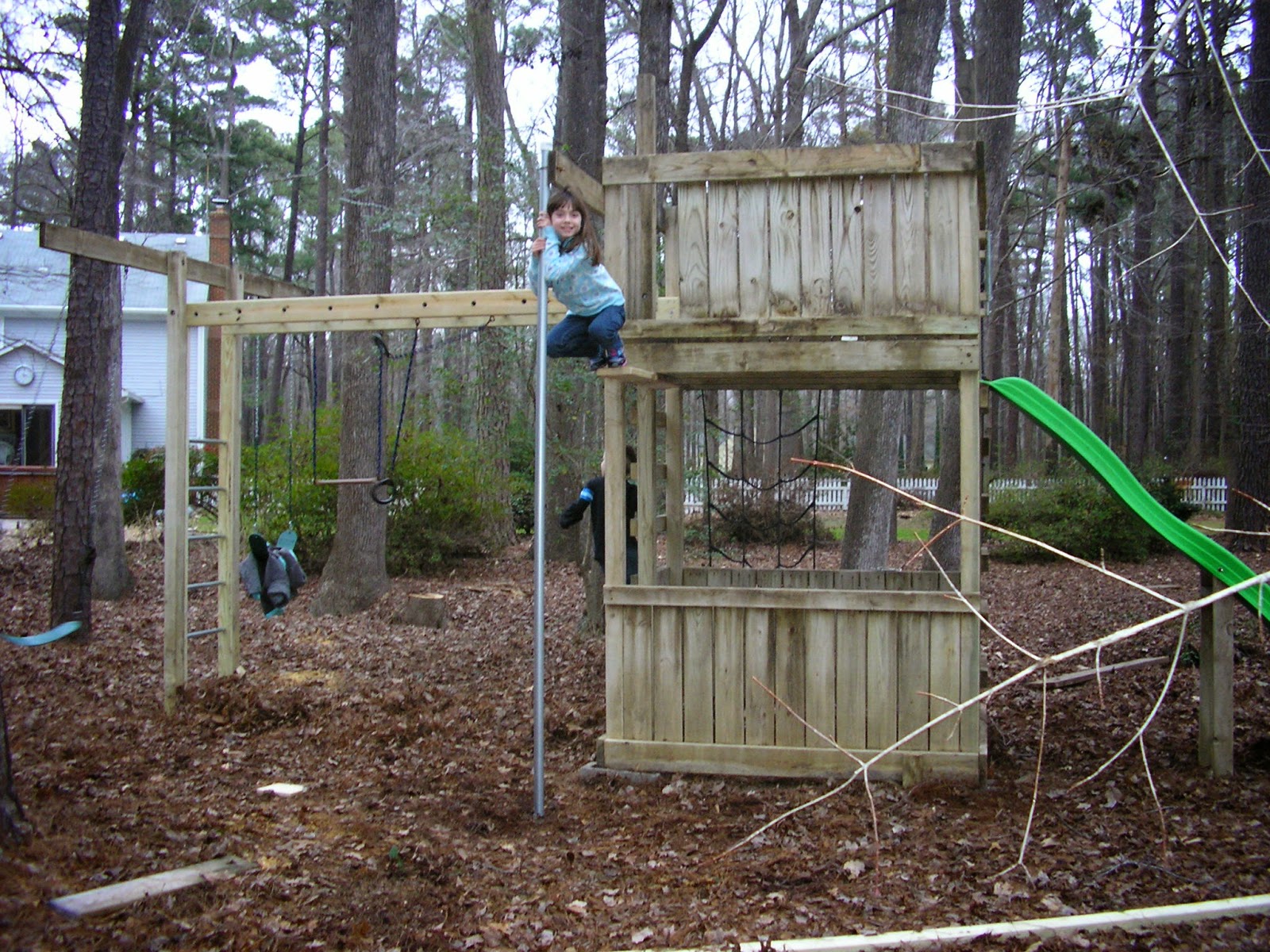 ~See?  Supercool right?  Apparently only for 10 minutes at a time, though~
In readying for the installation, Dad cut down a tree that was on the verge of falling over on the spot for the set, and I cut out 6 or 7 old azaleas that need to grow back in because they were diseased/unhealthy.  So, needless to say, there was quite a bit of wood out there to be hauled to the burn pile.  I informed the children that Papaw would move the logs, I would move the azaleas, and they would have to move the limbs that were left from the tree removal.
This did not go over well.
"Awww Mom, these are SOOOOOOOO heavy we can hardly lift them!"
My reply: "Use a wheelbarrow then, but they're not too heavy to lift and you can move them faster by hand."
[Grunt grunt grumble grumble]
10 minutes in and the whining was so bad that I had to stop my work to threaten them with a full day of housework enslavement should they say one more word to each other or me about how awful and unrealistic it was for me to ask them to move a pile of skinny limbs.  That did the trick and mouths were shut, but there was much pouting and panting and sadness still for the day.
...
Fast forward to today.  They had their friend Linda over to play for the morning and they decided after I told them "NO YOU CANNOT COME IN UNTIL 11:30 at LUNCHTIME!!" for the 40 millionth repetition that they could no longer stand sitting and whining on the awesomely awesome playset (which was somehow tediously boring today), and instead put themselves to a little building project.
They opted to build a log cabin.  Out of logs from the tree. That weigh at least 50 times more than the stupid limbs I asked them to haul last week.  So they then hauled about 20 logs from the tree we cut down to the center of my yard and proceeded to stack them up into walls.
I kid you not.
I repeat: these are the same children who a week ago could not be bothered to drag limbs 100 feet to a burn pile.
Then, this afternoon after Linda left, they decided to found a tiny tenement camp in the back yard. So they dragged the old toddler playhouse stored in the very back of the back yard almost double the distance the limbs were moved- all the way into the center of my back yard, so that henceforth I can marvel at my children's miniature hobo camp forevermore.  Here it is, in all it's glory... 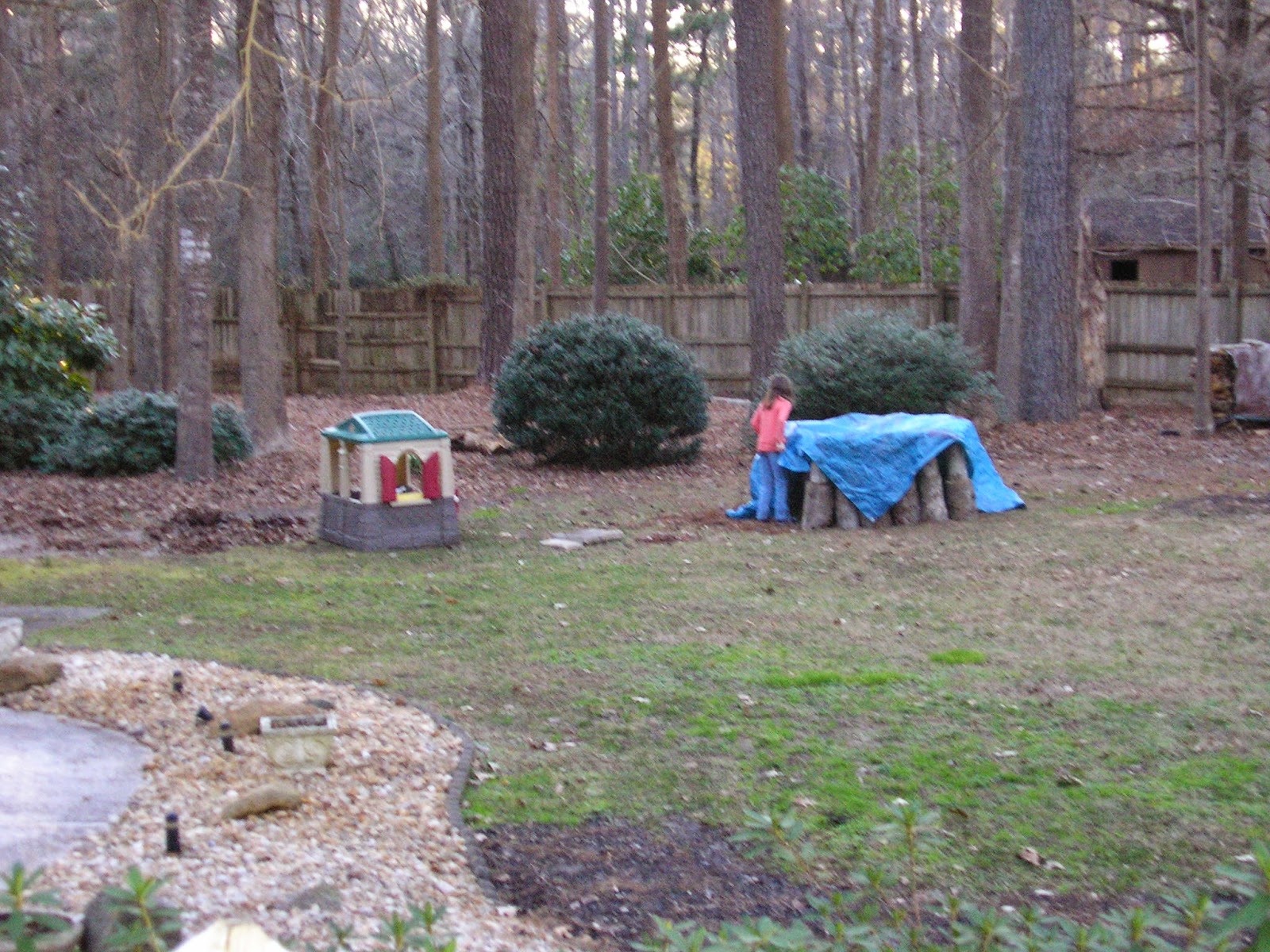 I am now taking builder orders for them to come and construct other small Hoover-villes in friends' yards if there is interest.  Wouldn't you want a hobo camp just outside your breakfast window, too?  For all the whining over housework chores, I'm considering making them sleep out there!

Meanwhile...I am gearing up to add bees to my list of beings I take care of that are wholly ungrateful for it.  That makes 9 chickens, 3 children, 5 hermit crabs, a husband (ok, he's at least grateful, lol), and someteen-thousand bees.  And somehow I can't not add more.  It's an illness.  I added 2 chickens this weekend and the poor dears are convinced I am the devil.  So my chicken-keeping friends' advice? "Hang out near their cage several times a day and talk, move around, etc. to make them used to you."  And that is the story of how I ended up sitting in a freezing garage singing "Let it go"  and "Mamas and the Papas" tunes [I have a limited repertoire of songs I know all the lyrics to, people] to two horrified chickens who still have no intention of letting me near them.
But I digress.
I have signed up for a class to learn the art of beekeeping, and upon telling my children, I asked them if any of them wanted to attend alongside me to learn.  They stared at me horrified from the other side of my kitchen island and asked, "WHY?  I don't wanna keep bees!"  Stunned, I asked why they were so opposed to bees, and they replied, "Because they'll sting us and they're no fun at all.  And why do you want bees anyway?"  I told them, "Well, because bees are good for the environment, I like their honey, and it's important for us all to learn about their lives and how they contribute to our world!"  As one, they rolled their eyes.  Then Sarah stated matter-of-factly, "MOM, you know we can just learn all that stuff on the INTERNET, right?"
And so the score is now:
Well-intentioned Mom: 0
Technology: 1
...
Who am I kidding?  Technology won out a long time ago.  Maybe I should be the one living out in the tiny hobo camp. :/
Posted by Mommymel at 4:57 PM

Comments are AWESOME... but be nice or I might cry, kthanx!
Mel